“Science, art and theology is often said to mingle into one, in view of this immense fractalness witnessed on the domes and ceilings of Islamic architecture. For the scientifically minded, quasi-crystalline complex Penrose patterns appeared in Islamic art five centuries before they appeared in Western science. “It is hard to picture,” said Paul Steinhardt, Princeton physicist who coined the term quasi-crystals in the “and it’s hard for humans to process these patterns and interpret them.”  source

Muqarnas at the entrance of the Sheikh Loft Allah Mosque in Isfahan, Iran. source

Muqarnas was built to break down vaults into multiple facets with the purpose of unifying a dome’s transitional zone into a compositional unity. The design consists of a complex array of vertical prisms with downwards protrusion resembling stalactite rock formations.

Muqarnas found in a connecting chamber between courtyards in Sahn-e ‘Atiq. source

Professor Shiro Takahashi has thoroughly documented the architectural records of the muqarans in geometric plan views (toomar), in his documentation he has classified them into three categories: square style, pole table style, other styles (Sinan), in attempt to clarify the formative styles of muqarnas.

Muqarnas’ drawings are based on an isometric network similar to the octagonal tiling, witch is a non periodic tiling using squares and diamonds (45-degrees rhombus). There are naturally regional differences: in the Arabian-Andalusian regions the small modules are either of painted cedar wood or sculpted pieces of moulded and engraved plaster that are highlighted with colours.

Muqarnas is a purely decorative element, structurally it’s dropped from ceiling, and this represents a boundary, hence the purpose of the investigation is to find a functional dimension for a merely ornamental component. And this bring us back to stalactite, a type of formation that hangs from the ceiling of caves. The name comes from the Greek “stalasso” and means “to drip”. 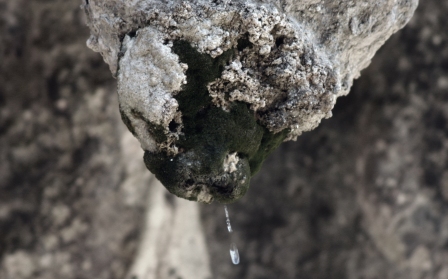 The water cathedral by Gun Architects created and suspended in Santiago, mimics both the look and activity of stalactites found in caves. As the water funnels through and drips continuously and rhythmically on spectators and passers by, it helps to cool them as well as create a personal connection both physically and mentally with the sculpture.

When it comes to cave, what is fascinating is their internal environment. The air is essentially saturated with water vapour which makes the relative humidity close to 100%. This high humidity is the result of moisture (water and carbonic acid) constantly seeping through the roof, walls, and floor of the cave. The constant humidity reduces variations in temperature. Air moving into the cave may be at a lower or higher temperature but it will be then uniformed to the inner microclimate.

To the left: one year’s temperature records acquired at Monlési ice cave. Two periods are outlined in which the cave air temperature displays distinct signatures. During winter season, a good correlation between cave air temperature and negative outside air temperature can be observed. In summer, very stable temperatures, close to 0°C, are related to the phase changes of ice such as melting. source To the right: baffles absorb sound energy from multiple sides, reducing noise and reverberation.

The principle is applied to the direct evaporative cooling system, water evaporates in the indoor air, the temperature drops and the humidity goes up improving the comfort. Trickling elements might be integrated in the structure of the small pointed niches composing muqarnas.

Additionally implications in acoustic performance are evident; apart from their beauty, prisms or stalactites also function as acoustic baffles that decrease echoes of reflected sound. The sound is absorbed by concave surfaces, improving the quality of the acoustic. There are strong elements supporting the hypothesis that during prehistory the caves with special acoustic properties were used for ritual ceremonies with songs, music and dance.

When it comes to fabrication, the design plays an important role in choosing the most logical production technique. A direct production employing 3d printers is reasonable if the project is characterised by many different pieces.

Olivier van Herpt designed and made his own clay extruder and experimented with many different types of clay. A breakthrough came when he decided to move from mixing clay with water. By redesigning his extruder, he could use hard clay instead. This lead him to be able to make larger items with higher levels of detail.

In the early days the 3D printed ceramic seemed rough, with the layers clearly visible. This new technique allows the material to have the same aesthetic, quality and tactility as other ceramics do. 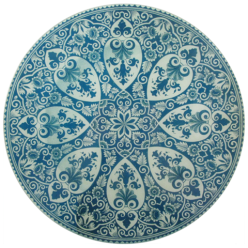 Researchers at the Centre for Fine Print Research, led by Professor Stephen Hoskins, have developed new methods of creating ceramics using a self-glazing 3D printed ceramic, inspired by an ancient Egyptian recipe called “Faience” known as Egyptian paste. The advantage is clear, the process is faster and the ceramic will need one firing instead of the two or three it would normally require.

A further production procedure considered, the most appropriate for manufacturing many repetitive components, allows the negative form to be directly milled into different kind of material that could be either plaster, wood or foam and then the ceramic will be simply poured into the mould.

Muqarnas, an annual on the visual cultures of the islamic world. Volume 27, 11 Nov 2010 by Gülru Necipolu, Karen Leal

The acoustics of the caves. Gino Iannace, Amelia Trematerra, https://www.researchgate.net/publication/263281641